skip to main | skip to sidebar

An eye for an eye.

I know its been a very long time since I have posted, but we have been going through a lot of stressful stuff. It all start last December, just after my hubby, Jon, was awarded the life saving metal. A patrol car as damaged and he was blamed for it. It suposedly happened on a very cold, snowy and busy night. The next morning the damage was reported by the next officer who drove the car. So Jon was blamed and written up. But he didn't do it and could prove it, so why should he have that on his record. He told his sergant that the security gaurd was with him the last hour of the shift and didn't see any damage on the car. Well, the sergant didn't interview the security guard.

So Jon appealed to the Chief, who wanted him to take a polygraph. If you have half a brain and know anything about polygraphs then you know that they basically don't prove anything. But police departments use them all the time, as well as most federal agencies. So Jon went to take the polygraph and the examiner asked him if he as under any stress. Jon told her that he was expereincing symptoms of PTSD (Post tramatic stress disorder). Well, she administered the test anyway. Not surprisingly, Jon failed the test with flying colors. Jon's therapist, who has been treating his PTSD, told him that taking the polygraph was pobably not and good idea, but the examiner's behavior was unethical.

The next day Jon is put on administrative leave and meeting was set up with HR for the next week to determine what was going to happen to Jon. It was time to call his union laywer, best $50 a month we have ever spent. The laywer suggested we get Jon's therapist to write a letter about his PTSD and Jon also wrote a letter about his PTSD that told about how a Marine buddy killed himself last December. At the meeting, Jon read both letters and his laywer hinted that if he was fired based on the results of the polygraph then that action would be considered unethical treatment of a vetern and the Chief could lose his job. The Chief was surprised and said that in all the years he has relied on polygraph he has never excountered something like this. So a desicion was not made and Jon remained on administrative leave for another 3 weeks. Altogether, we spent 4 week wondering if Jon was going to keep his job. He was finally fired based on the polygraph.

You would think that someone would hear the voice of reason after all of that. Nope. Like I said before, we have very good laywers who are taking an appeal the the state employment board. Last week at date was set and the Magistrate, who acts as a judge, saw our appeal saw the case and did not like what he saw. He sent a notice the police department and campus attornys ( Jon was working for a campus police department if you didn't know). The campus attornys took a look at the files and knew that they were going to get screwed and called our laywers to set up a date to talk about settling.

After all this time of stressing we can finally see the light at the end of the tunnel. I knew all along that everything would be alright, but it was really hard to keep believing after everything kept happening. The only thing that we have ever wanted out of this whole ordeal is to have Jon's record exponged. But after everthing, I want somebody to get some serious consequences. I want everyone envolved in the desicion to fire Jon fired. I want them to go through what we went through. I want them to be as broke as we are and be punished in every way possible for what they did to us. I really just want justice. Is that too much to ask for? My husband would say that I am ready to get out the torches and pitchforks and burn down the campus. I would settle for this and a few other dirty secrets to be leeked to the school paper or certain TV stations. I know enough to get the Chief and most of the command staff fired. I'd do it in a heart beat but Jon says I can't.
Posted by New Mommy K at 1:40 PM No comments:

Just wanted to wish everyone a very Merry Christmas from Denver. 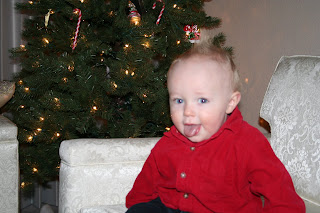 To the bride and groom!!

Two and a half months ago my grandmother died. I really miss her and I can't imagine how my grandfather is feeling. Except that in a few weeks he is remarrying. They say the the sign of a happy married is when the widow/widower remarries shortly after the death of their spouse. Well, this is all really weird to me. My grandma will have died barely three months when my grandma takes a new wife. I know that he has been very lonely and has always had my grandma to take care of him. But it seems a little too soon for me, apparently not for him. Of course , he is not marrying someone that he met off the Internet or has know since the death of my grandma. His fiance is someone he has know for the better part of 60 years. She was his secretary some 30 thirty years ago and her former spouse was his counselor the first time he was bishop. So its not like they just met. Okay, so maybe part of my shock is that you are not supposed to think of your parents, let alone your grandparents, as sexual beings. My mom says that this marriage is not just for companionship. Another part is that he is the only grandpa I have ever known and its strange for me to think of him without thinking of my grandma. My son is lucky to have four living grandparents and two great-grandparents. I am grateful that mine have lived this long and I guess it won't be so bad getting a new grandmother.
Posted by New Mommy K at 1:50 PM No comments:

Lannon and his Mommy are having Birthdays!!

One year ago today my baby was born. He was so small and helpless, who know he would grow to be the little pill he is today. He was so egar to get here that he put me into labor on my birthday. I can now say that it was worth all the smiles, giggles and this whole adventure we have been on for the last year. Technecally it started long before that, but who keeps track. After years of taking care of other peoples children, I can say two things: It was much easier when I could leave a the end of the day and being a mommy does not mean I know everything.
So here are some pictures for all you to oh and ahh over. Enjoy!! 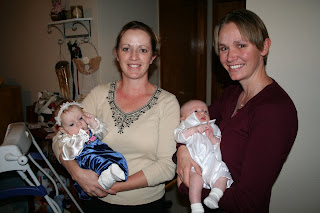 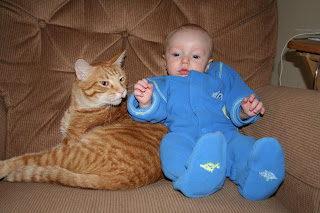 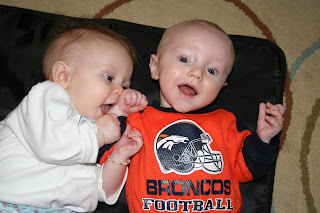 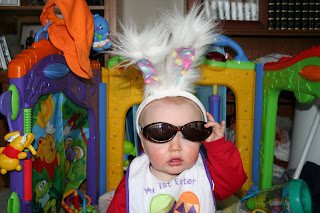 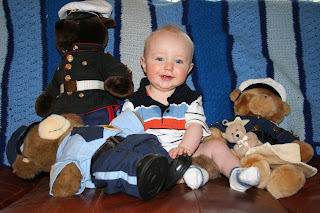 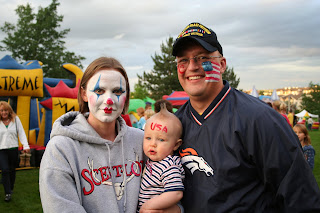 This was taken at the 4th of July. We waited in a very long line, but it was worth it.
Posted by New Mommy K at 1:05 PM 3 comments:

Ending with a Bang or rather a boom!!

The last seven weeks I have been babysitting for my mother-in-law's boss, who is a dentist. When I decided to do it I thought that it would make her life at work easier because her boss wouldn't have to worry about child care while her regular sitter was on vacation. Well, it turns out that her regular sitter didn't do squat and gets pays diddly squat. So the job consisted of watching two boys, ages 2 1/2 and 5, four days a week for 5-9 hours a day. It totally sucked. Their normal sitter let them watch TV all day long; they didn't eat real meals, just snacks all day and they never left the house. If that doesn't sound too bad to you, we just imagine the most spoiled, rotten brats you have ever known and double it. I could, however, bring my son to work. But that too turned out to be a bad thing. Any way, to make a long story short, yesterday was my last day. I took them to the zoo, we had fun, then when we got home....the five-year-old fell out of my car and did a face plant on the cement. He didn't break anything, just his lip. Oh and the gum above his teeth was bleeding, profusely. I really thought their mom was going to freek out on me, but amazingly she didn't. But its all over and today I am doing nothing. Yay!!!

On a sad note. My grandmother died a few weeks ago. She was 83 and was in poor health for the last few years. It happened suddenly, but kind of romantically. She died in my grandfathers arms, how sweet is that. Now I wonder whose funeral I'll got to next my mothers or my grandfathers.
Posted by New Mommy K at 9:48 AM 3 comments:

Okay, I finally have some pictures of Lannon. He is 9 months old and so cute.

So, I didn't think it would get to this point so fast. My son is at the stage where he only wants Mommy. I'm flattered, of course, but its kind of insulting to the grandma's when he starts to scream hysterically and won't stop until Mommy holds him. Daddy will do if mommy is nowhere to be found.

The other thing I wanted to tell all of you is that my husband is a hero. Not just my hero. About two weeks ago John was patrolling and was flagged down by a young man whose friend had just collapsed in the back of his car. John started CPR on the sidewalk until the paramedics arrived, about a minute. He spent the rest of the shift at the hospital and writing a three page report about it. When he came home we was really upset about the whole thing. I was too tired to realize it was because it reminded him of when I had my seizure. Yesterday he was nominated for a Life Saving metal. The afore mentioned reason is keeping him from being excited about it. That and work is his very least favorite place to be. (He misses me and the babe.) He was written-up a few months ago and is trying to avoid further write-ups. Although the sign the of a good officer is being written-up one month and receiving a metal the next.

Oh, and I promise I'll post pictures soon. Lannon is getting so big.
Posted by New Mommy K at 6:01 AM 1 comment: